In response to the Coronavirus, (COVID-19), the Ramona Municipal Water District lobby is temporarily closed effective Tuesday, March 17 as a precautionary measure to protect our customers and employees. All other District business and operations are being performed as usual. Water quality and supply are not impacted. Additional information is available here.  Thank you for your patience and understanding. 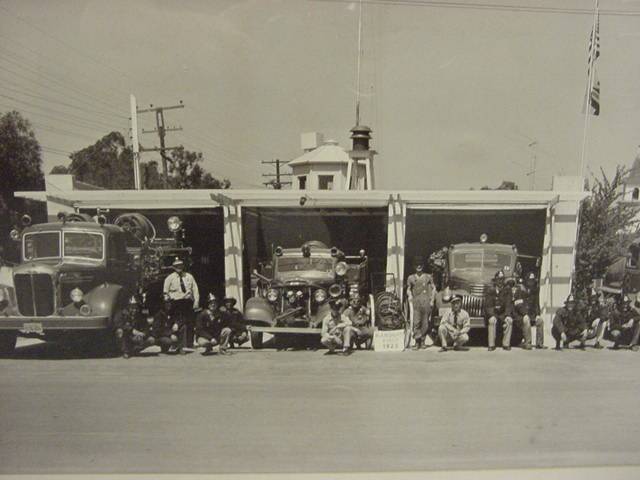 In the early days, as many other small communities, Ramona had no fire protection other than unorganized help from neighbors. About 1924, John Barger, who owned what is now Ransom Brothers, donated a wheeled soda acid fire extinguisher that he kept at the lumber yard. Using a large steel railroad engine tire, volunteer firefighters would strike the wheel with a sledge hammer to sound an alarm for fires.

Early records of 1952 show that the volunteer firefighters responded to 32 calls for the year. Now the down town fire station 80 responds to over 1800 a year. The Ramona Fire Protection District was formed in 1946, covering 22 square miles. By 1978, the San Diego Country Estates became a part of the RFPD and new Fire Station was added. Since that time the District has grown to over 75 square miles.The enactment of Proposition 13 brought about financial trouble for the RFPD. In 1981, the Ramona Municipal Water district offered assistance, and the the Ramona Fire Department was formed.

Finally in July of 1993, a cooperative agreement between the RMWD and the California Department of Forestry and Fire which allowed for employees of the CDF to staff RMWD fire equipment. The department now has over 34 paid firefighters, paramedics, and a staff working between the 3 fire stations 80, 81, and 82.